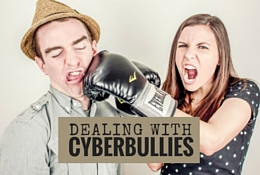 How to Deal with Cyberbullying on Social Media

Bullies. They used to terrorize the playground, pushing around the other kids, calling them rude names, and even stealing their lunch money. Then we grew up and graduated, and we thought we’d gotten away from the bullies forever. Unfortunately, just because we’ve grown, doesn’t mean the bullies aren’t still around. Bullies exist in all forms in the world, from angry bosses to perpetually unhappy clients. And now, bullies even exist online.
Online bullies, aka cyberbullies, are people who attack or harass individuals or businesses online. They may simply have a difference of opinion, or they may have a cause that they are advocating for. Whatever their purpose, cyberbullies are often vicious and unreasonable. They don’t play fair, and they don’t spare feelings. We wish we could say that in the animal-loving community, cyberbullies are non-existent. After all, we all want the same thing – what’s best for our pets. Unfortunately, even the veterinary community has had to deal with cyberbullies.
Whether they’re ranting about a bad experience or rallying behind a cause, cyberbullies can be a real problem for businesses on social media. They can hijack pages, write bad reviews, and generally cause trouble. The good news is, it is possible to weather a bully attack and come out the other end OK. It’s all about how you approach the situation.
It’s also important not to let the potential for a cyberbully attack prevent you from meeting your fans where they are online. Social media is a great affordable marketing tool, and a few troublemakers shouldn’t prevent your practice from connecting with clients on social.
So what do you do if the cyberbullies start making trouble? Here are some general guidelines and some more specific tips for dealing with cyberbullies on your favorite social platforms.

What Not to Do with Cyberbullies

Cyberbullying is hard to deal with. The bullies can be cruel, relentless and very personal. But you should never stoop to their level. Nothing makes you look worse than turning around and attacking in return.
A great example of what not to do comes from Amy’s Baking Company. The restaurant was featured on the TV show Kitchen Nightmares. Following their media exposure, Amy’s Baking Company was attacked by nasty comments from users on sites such as Yelp and Reddit. However awful the restaurant was, they didn’t deserve to be personally attacked. Unfortunately, their response to the cyberbullying was also wildly inappropriate:
This is a fantastic example of what not to do when someone attacks you online. This angry response didn’t do anything about the cyberbullies and it also made the restaurant look bad.
Now that we’ve established the wrong way to deal with bullies, let’s lay down some concrete strategies for actually surviving a cyberbully attack.

Pay Attention
If you’re not monitoring your social media accounts, you won’t be aware of a storm brewing or a mob with pitchforks on your doorstep. Make sure you’re checking social media regularly or have notifications set on your phone, so that you’ll be aware of what’s happening at the first sign of trouble. As an added bonus, keeping tabs on your social media accounts means you’ll also have the opportunity to respond when you receive good engagement from your genuine fans.

This is a strategy that professional social media managers employ for the accounts they manage. Your practice may not have someone professionally managing your practice accounts, but you should still create a plan of action for potential problems.
Include information in your response plan like:

Being prepared not only tells you what to do in the event of a crisis, it also prevents you from making rash decisions or saying things you might regret later.

In the event of a cyberbully attack, you may find that you have too many messages to ever reasonably respond to, even if you wanted to. For the sake of being transparent, it’s a good idea to keep communicating, but also recognize that you don’t have to respond to everyone. In fact, you would probably go crazy if you tried.

You can’t pretend that the cyberbullying isn’t happening, especially if it’s occurring repeatedly or relentlessly. Instead of trying to sweep it under the rug, be open about it, write posts acknowledging that it’s happening, and be prepared to defend your stance. Make sure you know what your practice’s viewpoint is on whatever issue you’re being harassed about, and be ready to stand up for yourselves. This will help clarify to your fans and real clients why you believe what you do, and keep you looking rational and clear-headed in the face of harassment.
Additionally, if you need to monitor or delete comments on your page, make sure you let your fans know that you are doing so and why. They’ll understand, especially if you make the reason and purpose clear. Transparency is often the best policy for dealing with irrational hateful abuse.Let’s turn our focus to your favorite social media platforms. If you want to know the difference between a hide, a ban, and reporting, then these tips are for you.

When someone has a legitimate complaint about your service or has had a bad experience and is trying to tell you about it, it’s never a good idea to delete their complaints. However, when people are harassing your practice, saying false things, or being rude to you and your staff, there is no reason to continue humoring them.
If the bullies are simply disagreeing with you, it’s OK to leave their comments up and in some cases, even respond to them to calmly explain your stance. But if the comments escalate into inappropriate language, personal attacks, or the same comment spammed over and over again, don’t be afraid to remove them. You have several options when it comes to dealing with unwanted comments on Facebook.
Hide
Hide is your first option for any negative comment that you would like to get rid of. You access it by clicking the little x in the top right hand corner of the comment (you have to hover your mouse over the area to be able to see it).
The hide feature allows you to hide comments from your Page so that no one but the commenter and their friends can see it. This can be a very effective way of removing a commenter’s impact without them realizing it. The commenter isn’t aware that the comment has been hidden, but your Facebook fans will no longer have to look at it.
Delete
Once a comment has been hidden, you are presented with the opportunity to delete or report the comment, or ban the user who wrote the comment. Deleting a comment will remove it permanently, and the user who wrote the comment will know that it’s been deleted.
This can be a risky decision to make, because it could prompt the user to write more inflammatory comments in retaliation. If you decide to delete comments, we recommend including a response explaining why the comment was deleted, such as bad language, abusive behavior, or a breach of terms and conditions. This lets your other followers know that you aren’t just ignoring upset customers or deleting comments at random.
Report
You can also report comments to Facebook if they fail to comply with the terms and conditions of the site (including bullying, nudity, spam, etc.). Just be aware that Facebook isn’t especially prompt with their response times, so this might not yield timely results.
Ban
If a user is continually a problem, you may need to consider taking more drastic measures. Banning a user removes their ability to publish to your Page or like or comment on your posts. They still like your Page and can share your content elsewhere, but on your own Page, they cannot publish at all. This removes their ability to say nasty things where all your fans can see it.

It’s possible to ban certain bad words from your practice Page through your Facebook Page settings. This will prevent those words from ever appearing on your Page. If you’re interested in setting a bad words ban up, check out this tutorial from Snout School.

Mute
Muting a user means you will no longer see that user’s tweets or retweets in your Twitter feed. This can be a helpful feature if someone you are following tweets out a lot of spam.
Block
Blocking a user prevents them from following you or adding you to a list, sending you a direct message, viewing your account, or tagging you in a photo. If you block someone, you will automatically unfollow them. Twitter does not alert users that you have blocked them, and it does not prevent them from mentioning you in tweets, although you will not see those mentions. Click here to learn how to block someone.
Report
As with Facebook, you can report Twitter users who are really harassing you. This could result in a warning or the suspension of their Twitter accounts. If a user is really giving you trouble or is issuing death threats, reporting might be a good step to take. You can get step by step instructions on reporting someone here.

Unfortunately, your social media accounts are not the only place that cyberbullies can attack you. If your clinic has accounts on any review sites, then you are susceptible to receiving negative and false reviews from bullies.
If you do receive any false reviews, the following review sites will let you respond to or report them:

The reporting process can be frustrating and slow. Additionally, review sites like Angie’s List and VetRatingZ don’t allow the removal of reviews at all. That’s why we so strongly recommend getting started on online reviews early.
The good news is that online shoppers are pretty intelligent, and many can tell if a review is obviously fake. In addition, negative reviews can be good for your business, because they make your reviews look more legitimate. And if you start putting in the legwork and generating good reviews from your customers now, when the negative reviews come rolling in, they’ll be drowned out in the sea of good ones. We’re not in school anymore, but unfortunately, the bullies are still around. Luckily, with the right attitude, a plan in place, and knowledge about your options on social media, you can successfully handle a cyberbully attack and come out the other end looking better than ever, thanks to your ability to keep your cool.

Take control of your online reputation with a WebDVM website. Learn more!

What Client Communication Technology Does a Veterinary Practice Now Need?