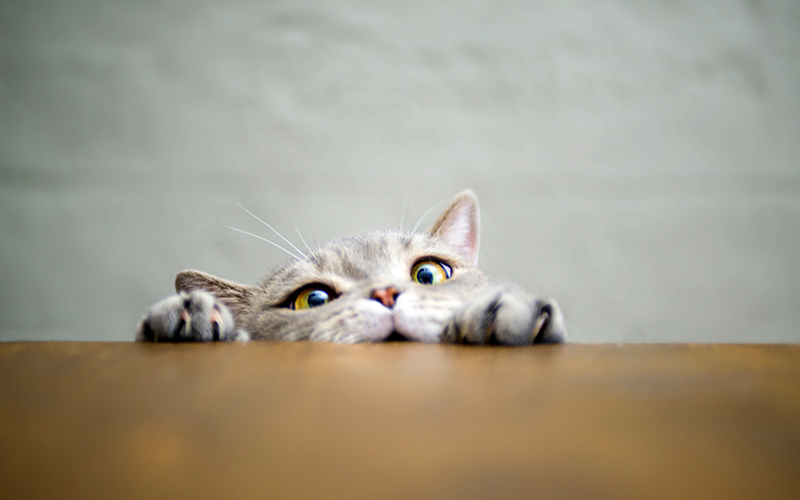 After our last humor blog, which involved a real story about scientists trying to teach robots to wash dishes based on understanding the animal brain, we didn’t think “the new normal” could possibly contain any more developments with a high likelihood of humorous outcome.

We were so wrong.

To illustrate, our latest humor blog (created to offer veterinary teams a few stress-relieving laughs) presents three more recent pet-related science stories you may have missed, along with our humorous take on what those stories may mean.

On Nov. 10th, 2020, scientists from Nanyang Technological University (NTU) announced a new AI-powered “electronic nose” that can sniff out meat freshness. Unrelated, Domotron announced the launch of an advanced AI smart home solution in November of 2019 that can learn “users’ preferences and create personalized automations for existing smart home devices.” While NTU scientists did not say whether they based their electronic nose on a dog’s nose, speculation runs high that, if they did and should Domotron interface NTU’s electronic nose with their smart home solution, pet owners may one day wind up hearing from some smart home device, “Of course I’ll stop blasting polka music through the speakers. Just give me some treats first, and please don’t tell me again that you don’t have any. I can smell them, and if you think you hate polka music, I’ve got a three-hour kazoo playlist ready to go on Spotify.” While smart home tech providers have expressed doubts about such events actually happening, kazoo bands everywhere are reportedly thrilled by the prospect.

A Band-Aid Boom Because of Bored Cats?

On May 9th, 2019, Science released a story about how cats rival dogs in many tests of social smarts, but asked the question, “Is anyone brave enough to study them?” While the story indicated that many scientists were willing to brave the cat disposition toward clawing themselves out of uncomfortable or boring scientific situations, the story did not touch on the likelihood that, in tandem with speculated growth in cat studies, Johnson & Johnson may see spectacular sales in Band-Aids.

On Sept. 22nd, 2020, Science Daily released a story about how researchers at Northwestern University had developed a new theory that can predict the movement of animal sensory organs (i.e. eyes, ears, and nose). Acknowledging that animal sensory movements are heavily motivated by the need to “find food and mates and to identify threats,” the story said that researchers saw opportunity to apply their theory to sensor technology in driverless cars. While the future of such application remains unknown, speculation is that, should such an application happen, driverless car companies may one day see stock prices plummet when their driverless cars (and hapless passengers) go chasing after food trucks, or stop dead in their tracks at the sight of some headlight-popping GTO or Mustang, or drive under a bed because of fireworks or other scary sounds.