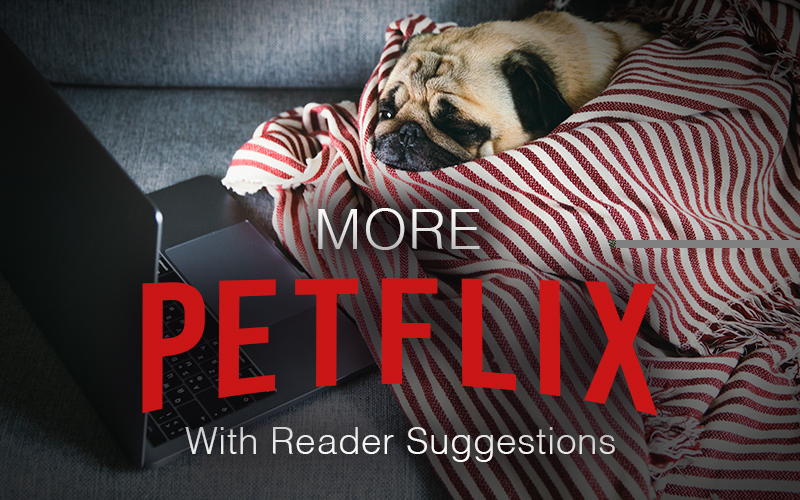 In response to our inaugural Friday Fun Blog Petflix (created to offer some stress-relieving humor for veterinary teams during the COVID-19 crisis), veterinarian Kate McDaniel of Scottsdale, AZ wrote to ask, “What about the classics? Donnie Barko? Pup Fiction?” And other people contacted us with similar parody suggestions. We’re thrilled that so many people enjoyed and shared our humor blog. And in the spirit of continuing to offer veterinary teams a brief respite from the ongoing pressures of the current crisis, we decided to issue a second Petflix humor blog that includes reader title suggestions. Enjoy!

In a time when people are spending more time indoors watching Netflix, and bored pets wonder why no one has produced programming for them, the newly launched Petflix vies to be the next top dog in streaming entertainment with a selection of movies, TV shows, and concert presentations produced for both pets and people.

Here’s what’s coming (in addition to other Petflix programming):

Chronicling the rise and fall of a paper-trained Corgi, Snarls Canine (Orson Welsh Corgi), who builds a newspaper empire only to sabotage his success by constantly doing his business on the very papers that he’s trying to sell. Benton Swab co-stars as the party leader who keeps calling Snarls to ask, “Stop putting my face on the front cover!” Nominated for Best Dramatic Use of Newspapers Unfit for Recycling at the 1942 Pawscar Awards.

Two “bit men” are hired by a shameless grime lord (Ving Mange) to retrieve a stolen suitcase, but the pair constantly alert their quarry by their loud shrill-osophic conversations (a.k.a. howling). Co-starring Bruce Willis as the voice of a struggling Boxer who, despite his breed name, has no interest in boxing, apart from using boxing gloves as chew toys. Nominated for Best Puppy Dance Scene in a Cocktail Club at the 1995 Pawscar Awards.

A troublesome rabbit named Frank (oddly wearing a bunny costume) tries to depress a spunky Airedale Terrier named Donnie by telling him that the world will end in 28 days. Yet to his dismay, Frank (whom only Donnie can see) discovers that Donnie loves chasing rabbits, leaving an on-the-run Frank (whom Donnie assumes will taste like a frankfurter) to suspect his personal world may end a heck of a lot sooner than 28 days. Co-starring Jake Gyllenhaal as Donnie’s owner, who says, “I don’t know what Donnie thinks he’s chasing, but wow. It looks like he’s having the best day of his life!”

After years abroad in search of love, a disillusioned cat owner returns to his apartment in the belief that what he sought has been waiting for him at home all along—only to discover that his cat napped the whole time and barely noticed he was gone.

Following the exploits of a canine ad team on Wagison Avenue, who don’t have any ad ideas but nonetheless land account after account by their ability to look adorable while begging for hours until their clients cave. Jon Hamm co-stars as the Chow Chemical exec who says, “Fine! We’ll sign! Just stop drooling on my Persian rug!”

The Adventures of Purrlock Holmes

In this all-feline retelling of The Five Orange Treats by Purr Arthur Moggy Doyle, crack detective and snappy dresser Purrlock Holmes (Bengal Cummerbund) tries to solve the disappearance of five salmon-flavored Temptations. Manx Freeman co-stars as Proctor Watson, Holmes’ beleaguered assistant, who solves the case in five seconds by informing Holmes, “The treats are in your mouth. I’m watching you chew them right now.”

A fork-wielding feline (Arthur Furry) vows to save the geometrically skewed underwater kingdom of Slantlantis from attack by the evil Jacques Manta and his dogfish minions, provided he can ever overcome his fear of water. Jason Momoa co-stars as the well-meaning therapist who winds up in ER after unwisely tricking Aquacat into a trip to the beach.

Entrepreneurial pets pitch business ideas to a panel of venture capitalist canines. In the opener: Waggin’ Denizen Leash Merryfield turns down a pitch for a bubble machine for dogs that shoots bacon-flavored bubbles after realizing humans would hog the machine and never leave the house.

While making a documentary about a clandestine crêpe dealer in Florida, canine director Eric Goodboy stumbles upon self-professed feline “big cat zoo” owner Mittens Domestic, whose “big cats” are really a collection of overweight barn cats. Boots Staffery appears as Joe’s animal wrangler, whose only job is to wrangle up the cats after they’ve slumped off the couch.

An intrepid catronaut (Rex Pitt) embarks on a dangerous space mission to Neptune to find out what happened to his missing father (Tabby Lee Jones)—only to discover his father alive and happily well-fed on a planet that very obviously should have been called Neptuna.

In this all-canine version of The Witcher, a solitary “monster hunter” becomes disillusioned after discovering the monsters he’s been chasing are really squirrels. Joe Batey co-stars as Lassier, the minstrel who lampoons the Fetcher in song until he learns what it’s like to wear a lute.

Based on the bestselling autobiography by the same name, this tale of success and over-the-top pet fashion depicts the musical rise of four misfits—Micki Ticks, Tommy Flea, Wince Squeal, and Lick Mars—from the kennels of Hollywoof to international glam-bark stardom as the band Pëtley Crüe. Songs include “Kickstart My Bark,” “Awoken in the Toys Room,” “Drooligan’s Holiday,” “Live Wire Fence” and “Doctor Mealgood.”

Have a title suggestion for future Petflix humor blogs? Let us know! Know someone who may need a chuckle during these stressful days? Why not share this Friday Fun Blog with them?