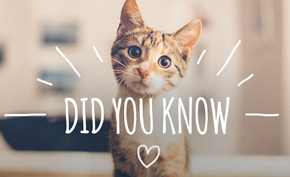 111 Did You Know Facts for Veterinary Practices

There are plenty of ways to increase the number of shares you can get on social media (some of which we’ve covered in our posts How to Get More Shares on Facebook [With Examples]). Today, we’re going to focus on one specific type of post that we’ve found often gets shared – the “Did You Know” post.
“Did you know” posts are a great way to both educate clients and encourage them to share your content on social media. They’re informative, allowing you to promote important pet health messages. And pet parents who care will share with their friends to ensure the message reaches as many people as possible.
Not all “did you know” posts are created equal. We’ve been posting these facts for over two years, and during that time, we’ve gotten a pretty good sense of what works and what doesn’t. We like to separate our “did you know” facts into two categories: fun and informative.Fun facts are facts that pet owners probably don’t know, like that Sir Isaac Newton invented the cat flap, or that a dog has 42 teeth. But they also contain information that isn’t directly relevant to the pet owner. The reader can’t act on the fact that their dog has 42 teeth, and the Sir Isaac Newton fact, while fun trivia, doesn’t have any direct impact on their lives today.The second kind of fact, an informative fact, has more direct relevance to the reader’s life. Knowing that obesity is the number one health problem in dogs is something that a pet owner needs to know for their own dog’s health. And even if the fact doesn’t encourage action, if the pet owner can relate to it, e.g. petting your dog has been shown to decrease blood pressure, then it also qualifies under informative.In order to maximize the effectiveness of your “did you know” posts, it’s a good idea to make them as relevant and informative to pet owners as possible. That’s not to say that all of your posts have to be informative. Fun facts can be just that – fun information to share with your readers. But when you’re looking to the maximize the number of shares you get on your social posts, be sure to keep these numbers and mind. Knowing what works well is the best way to achieve your goals and get the shares you’re looking for.

111 Did You Know Facts for Veterinary Practices

Armed with these “did you know” facts, you’re ready to educate your clients and increase your social shares at the same time. It’s a win-win!