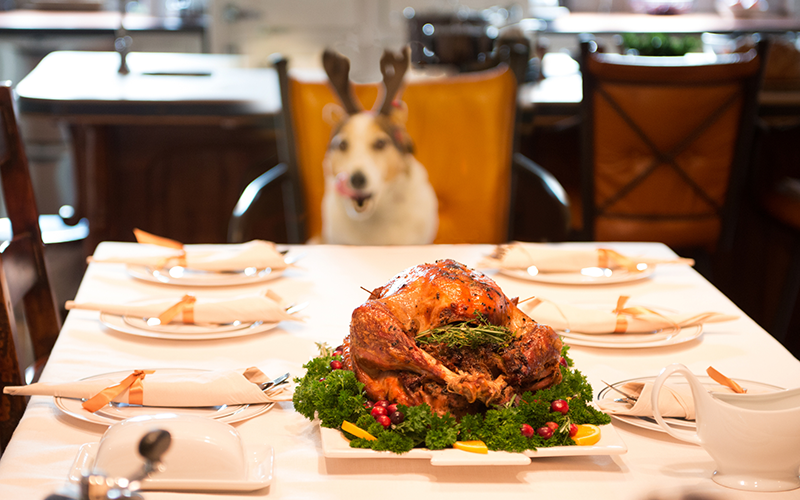 With so many delicious foods on the table at Thanksgiving, pet parents may be tempted to share some of the feast with their pets, and that’s understandable. After all, Thanksgiving is a celebration of friends and family—and pets are beloved family members.

While sharing certain Thanksgiving foods can be a good way to add some protein and veggies to a pet’s diet, there are hidden dangers in that holiday meal that some pet owners may not know about. To help educate your clients while saving your practice time, please feel free to copy and share the following information about seven thanksgiving foods that are dangerous to pets:

Although turkey is generally a good lean protein for dogs and cats, stick with small amounts of white meat that has had the skin removed. Dark meat has more fat that can exacerbate pet obesity and cause inflammation of the pancreas (pancreatitis). Also, remove any bones, which can lodge in your pet’s throat, stomach, or intestine to cause serious damage and complications.

As a sugar substitute found in diet baked goods, gum, candies, and other foods, xylitol is safe for human consumption. Yet for dogs, xylitol can be lethal. Xylitol is rapidly absorbed into a pet’s bloodstream and can cause hypoglycemia (low blood sugar), liver failure, seizures, and even death in dogs.

Onions contain a substance called thiosulphate, which causes a form of anemia in dogs and cats due to an abnormal breakdown of red blood cells. And onions don’t have to be raw to be potentially lethal to pets. Toxicity can occur from fried, dehydrated, or powdered onions in food, though signs and symptoms may not appear right away.

Like onions, garlic contains the compound thiosulphate, which can damage red blood cells in cats and dogs, though signs and symptoms may have a delayed onset. And just a little can be deadly, since garlic contains significantly higher concentrations of thiosulphate than onions.

In large amounts, chocolate can be fatal to dogs and cats. Theobromine, a compound similar to caffeine and found in all forms of chocolate (dry cocoa powder, baking chocolate, cacao, and candy bars as well as tea, cola beverages, and açaí berries) is considered toxic—and tempting, especially when left sitting unguarded on coffee tables. The darker the chocolate, the more toxic it is.

As an essential spice to pumpkin pie and other seasonal dishes, nutmeg contains a compound called myristicin, which can cause stomach upset in dogs and cats if ingested in small amounts. In large amounts, myristicin can cause symptoms ranging from disorientation and high blood pressure to increased heart rate and seizures.

Though shown to be beneficial to human health, cinnamon can cause problems for pets when consumed in large amounts as a powder or smaller amounts as an essential oil. Cinnamon overdose can lead to vomiting, diarrhea, low blood sugar and heart rate changes.

Here’s to a safe, warm and memorable Thanksgiving for both you and your pets!

How New Attitudes About Life Insurance Relate to Practices

The ROI of Educating Clients About Pet Insurance