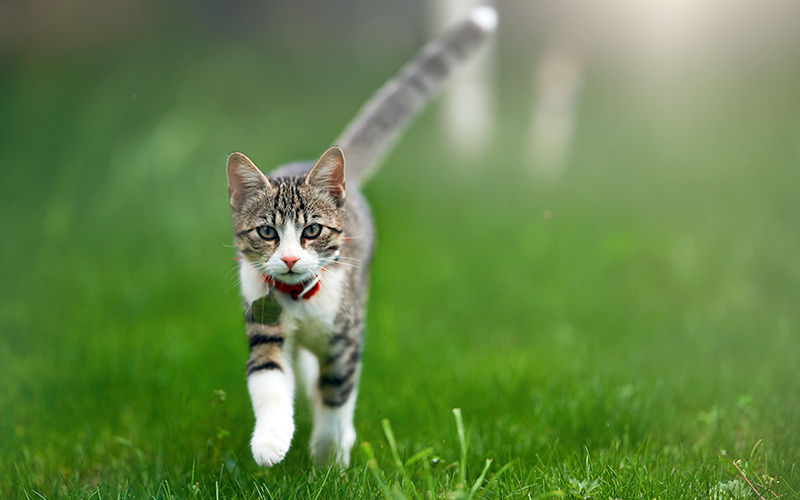 Pet Loss Prevention Tips and the Story of Kevin the Cat

July is National Lost Pet Prevention Month, and of the estimated 10 million pets that are lost each year across North America, not all are as lucky as Kevin the cat. This special true-life story shows how easy it is for a pet to become lost and provides five key pet loss prevention tips.

Pet Loss Prevention Tips and the Story of Kevin the Cat

July is National Lost Pet Prevention Month, created in 2014 by PetHub to give pet owners the information they need and to raise awareness about the estimated 10 million cats and dogs across North America that go missing every year. In 2018, one of those pets was Kevin the cat, whom people assumed had fallen prey to coyotes or foxes.

The assumption about Kevin’s fate was understandable.

Since kittenhood, Kevin’s home had exclusively been a two-bedroom walk-up apartment backing onto a conservation area where coyotes and foxes were known to roam. As an indoor cat, Kevin knew nothing about hunting or surviving in the wild against predators. Yet Kevin found himself facing those dangers one day after Kevin’s pet parents, Steve and Ashley, decided to move to a house some 29 miles away.

(For privacy, the real names of Kevin’s pet parents have been changed.)

No one blamed Steve and Ashley for what happened, because it was a scenario familiar to many people. Although they’d spent weeks carefully planning and packing for the moving day, Kevin’s parents nonetheless found themselves rushed with last-minute things, and discovered, to their dismay, that they’d packed Kevin’s carrier in the back of the moving truck.

With only a few hours left to clear out of the apartment, they decided that Ashley would take their car and drive to their new place while Steve figured out what to do. Thinking that there wasn’t enough time to unpack the truck to get the carrier, Steve decided to carry Kevin down to the cab of the truck—this proved to be a fateful mistake!

Once outside, a terrified Kevin furiously scratched himself free of Steve’s grip and bolted for the conservation area. Horrified, Steve chased after Kevin, but that only caused Kevin to run faster.

Searching until the sun went down, Steve grabbed a flashlight from the truck and continued the search as the night deepened, but to no avail. Kevin was gone. Time had run out. With only hours left to drive the 29 miles and unpack the truck, Steve was forced to abandon the search and drive away, feeling as anguished as Ashley would later feel after Steve broke the news.

The next morning, Steve returned to the area and posted $500 reward posters around town for anyone who might find Kevin. A few people called, telling Steve that they may have spotted Kevin, but when he heard that it was in and around the conservation area, the news didn’t come as a comfort. Steve could only imagine a bad ending to something that had been his fault.

Miraculously, Kevin somehow managed to survive three weeks alone in the conservation area. Although he was obviously stressed and malnourished when hikers found him, and took him to a local veterinary clinic, he was soon reunited with Steve and Ashley, and today, Kevin is doing fine.

Although Kevin’s story ended well, millions of cats and dogs aren’t so lucky. Of the estimated 10 million cats and dogs that go missing each year, the OSPCA estimates that about 75% are never found or make it home again.

To help ensure that you and your pet don’t ever face such a situation, here are five simple loss-prevention measures that you can take:

1. Keep Your Dog on a Leash

One of the simplest and most practical ways to keep your dog from straying is to keep him on a leash, whether you’re going for a long hike in the forest or taking a short stroll to the corner. By nature, dogs are naturally inquisitive, and a seemingly short dash after a squirrel or bird may wind up being a long, stressful search for a dog who decided to take off after anything else that may be around. The sights and smells can be tantalizing.

2. Secure Your Pet Within a Fenced Yard

Keep your pet safe at home with a chain link or slat board type of fence around your yard. For wooden fences, make sure the boards are in good shape and tightly set in place to prevent your pet from creating an escape route by nosing apart any boards that are rotten or loose.

To prevent an escape by digging under the fence, make sure the fence is buried at least six inches into the ground, and make sure it is tall enough to prevent your pet from jumping over it. While small dogs with short legs can have difficulty jumping just a few inches off the ground, some dogs can jump as high as six feet. Is your dog one of those?

Invisible fences will work for some dogs. However, some will brave the electric shock to engage in the chase of a coveted rabbit, squirrel or your neighbour’s cat! Even dogs that are trained to stay within the boundary of an electric fence can run off if frightened by a thunderstorm, car back-firing or firecrackers. The dog is then effectively locked out of returning unless willing to brave another electric shock.

Supervision means more than making sure your pet is secured inside a fenced yard. It means not leaving your pet outside for long periods of time without checking on him. Many lost pets are simply bored pets that have found a way to escape. So, periodically check on your pet. If you must leave for a few hours, consider tethering him in the yard (for added safety) or simply bring him indoors. If you must be away for an entire day, overnight, or longer, consider taking him to a pet daycare or hiring a pet sitter.

Cats love to swipe and claw at window screens when bugs, flies, and irresistible playthings come along, and cat claws are sharp. Wire window screens are usually claw resistant, but cats can easily claw a rip in polyester and other types of window screening fabric. Check window screens often and repair any holes or rips as soon as they appear.

5. Have Your Pet Microchipped

Traditional pet ID tags remain an effective way for pets to be identified and returned home, and GPS pet trackers enable pet owners to find lost pets on their phones. Yet ID tags and trackers are attached to collars, and collars can become detached from pets. Your pet could wriggle free of his collar while squeezing through a fence or the pet-safe breakaway collar could fall off.

Microchipping your pet is a safe, reliable, and permanent way to ID your pet. About the size of a grain of rice, a microchip contains a unique number that identifies your pet. It is injected just under your pet’s skin between the shoulder blades. It’s no more painful than a typical injection and can be done during a routine veterinary visit.

You need to register your pet’s unique ID number and your contact details with a microchip registry, and update it if you move or your phone number or e-mail address changes.

If your pet gets lost and is taken to a veterinary clinic or animal shelter, he will be scanned for a microchip to search for his unique ID number. That number will be called into a pet recovery service, and you will be contacted based on the information you provided in your registration.

July is National Lost Pet Prevention Month. Pets go missing every day of the year. To help reduce the incidence, keeping pets and their families together as they should be, we encourage you to share this informative article with pet owners and affiliated veterinary clinics and services.

3 Top Veterinary Trends for Practices to Succeed in 2021

How New Attitudes About Life Insurance Relate to Practices

The ROI of Educating Clients About Pet Insurance